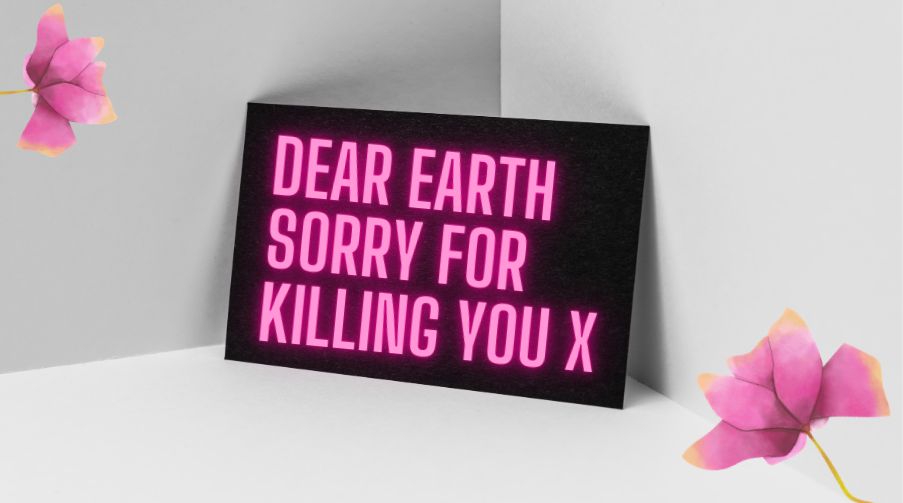 Happy 51st Earth Day! What lovely gift did you get our planet this year to show how much you love it? Nothing? Nothing at all? Hey, same here! Well, we found some flowers left in a dumpster. Earth can have those. Our treat.

Actually, that’s appalling. How about we chuck in a brief history of Earth Day too? That should hopefully be enough for Earth to resist dumping us for another year…

The very first Earth Day took place in the United States in 1970 and not a moment too soon. Because in the decades leading up to it, Americans were breathing in more air pollution from inefficient automobiles and unregulated industrial factories – not to mention that you could advertise cigarettes like this. Basically, if you lived in America in 1956 it was probably healthier to just not bother breathing at all. Remind us to get a doctor to fact check this article later. If there’s time.

So to explain the origins of Earth Day, we’ll have to travel back to 1969! A time before any good video games had been invented. Isn’t that going to be tough, considering Climate Replay is all about using video games to talk about the Climate Crisis?

In 1969, Wisconsin Senator Gaylord Nelson managed to tear himself away from Lunar Lander for a few minutes so he could propose the very first Earth Day, a collaboration between government and citizens. This was in the aftermath of a massive oil spill in January of that year in Santa Barbara, California. Literally the only good thing about the tragic Santa Barbara spill is that Mark Whalberg didn’t make a movie about that one. So it’s easy to see why US citizens in 1969 would find a day dedicated to not drowning our planet in toxic gunk so appealing.

Senator Nelson was inspired by the student anti-war movement. He wanted to combine that energy with an emerging public consciousness about air and water pollution. And since the kind of energy he’s on about here was completely green, Climate Replay approves! Good work, Senator!

Senator Nelson announced an idea for a teach-in on college campuses to the national media. He persuaded Pete McCloskey, a Republican interested in conservation, to serve as his co-chair and recruited Denis Hayes, a young activist, to organize teach-ins.

They chose April 22, a weekday that fell between Spring Break and Final Exams. Good idea! That’s also two days after my birthday! What’s that? How is that relevant? Well… it’s not, I guess. Fine. Jeez. We’ll move on.

Denis Hayes recognised that this movement could involve more than just students. Therefore, he built a national staff of 85 people to promote events across America! The name was also changed to ‘Earth Day’, a name that caught on with the national media. Because it’s a good name! Imagine if they’d gone with ‘Soil Day’ or ‘An Earthy Evening with Gaylord, Pete and Denis’. We’d have probably banned them from Earth entirely, and rightly so.

In 1970, the first official Earth Day kicked off! 20 million Americans, 10% of America’s entire population at the time, took to the streets, parks, and auditoriums to protest the impacts of 150 years of unchecked industrial development without any consideration of the human and society impacts. Air pollution being bad is a great thing to shout about, because if you start coughing and can’t finish your sentence… perfect! That proves your point!

Earth Day achieved a political alignment between Republicans and Democrats, and also between urban and more rural populations. And between socioeconomic classes. Awww, look at our species getting along for literally the first time ever! This is something we’re absolutely aiming to achieve with Climate Replay by the way. We don’t care about your income or your background or even if you’re not really a fan of Lunar Lander. This climate fight needs everyone.

Earth Day had a massive impact. By the end of 1970, the Nixon administration had established the Environmental Protection Agency and passed the Clean Air Act. Imagine trying to oppose something called the ‘Clean Air Act’. How would you even make that argument? “I think filthy air is tastier?” “Farting is the only time I feel truly alive?” OK, buddy. You do you.

We’re going to skip forward to 1990 now, and not just because I can’t bring myself to use another 1970s video game screenshot in this article:

In 1990, environmental leaders and Denis Hayes organized for a global Earth Day. Yeah, come to think of it, having a non-global Earth Day does slightly miss the point. They mobilized 200 million people across 141 countries, providing a global stage for environmental issues. Expecting another pithy one-liner? Well TOUGH because we think that’s brilliant!

So that’s Earth Day! It’s widely recognized as the largest secular observance in the world, marked by more than a billion people every year as a day of action and advocacy for better global, national, and local policies for our planet. Why not click here to head to its official website to learn more? Tell ‘em Climate Replay sent ya! Don’t tell them about our dysentery jokes.

Today marks the 51st Earth Day. Let’s try and make sure Earth’s still around for a few more, eh?

Thanks to Frances Withrow for researching this piece.

Dedicated to Mary, who tragically broke an arm in the making of this article.